On Tuesday, March 11th, I published a piece in the New York Times on college admissions testing in which I argued for the assessment of mental abilities beyond the SAT. The original op-ed is online here. 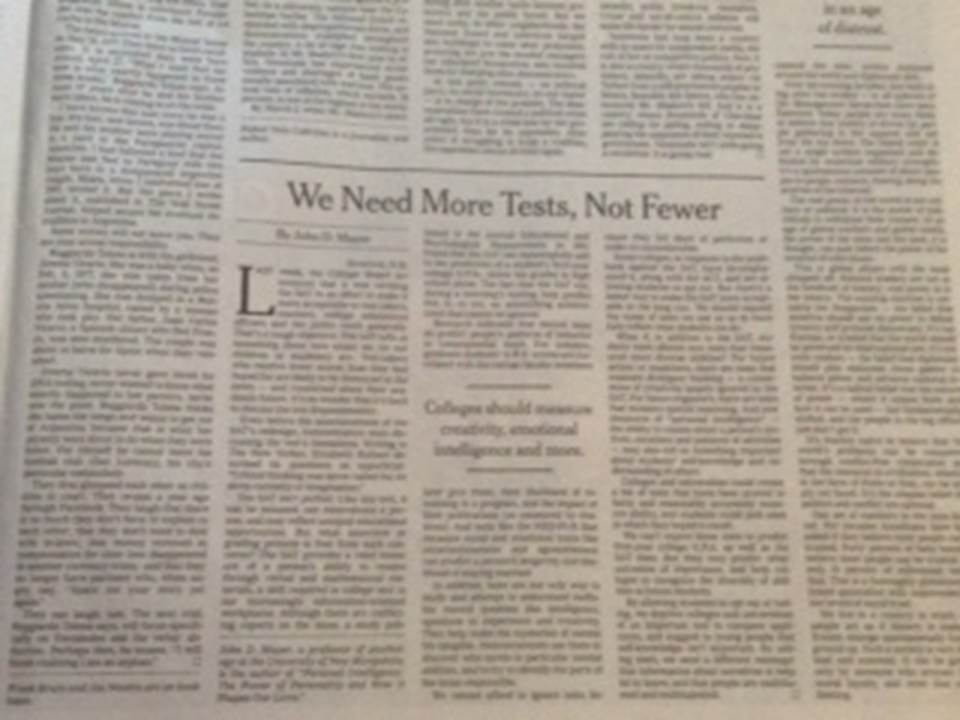 In that op-ed piece, I suggested that students might want to take additional measures of abilities beyond the SAT. If they were to do so, it would better reflect the multifaceted nature of our youth and their talents. I also believe it would free teachers to use a broader range of instructional techniques, because the wider range of tests would be likely to pick up the virtues of different teaching styles (I did not make this point explicitly in the original op-ed). It would also result in less emphasis on any single test.

Here is the basic outline of the op-ed:

As a condition for publication at the New York Times, contributions are fact-checked. Because psychological testing is a controversial area that attracts a great deal of attention, and because in places I made claims that appeared to be inconsistent with other reporting in the paper, my remarks were especially carefully scrutinized. I have provided the key references on which I based my arguments, in the section labeled “Supporting Documents” below.  In one case, I have substituted an article that is better than what I provided at the time.

In a letter to the NY Times, Elizabeth Wissner-Gross, an educational consultant, argued that there are a range of optional tests students can take to demonstrate their aptitude in traditional academic areas, and provided a helpful list. As she put it:

I think many students may be surprised and intrigued to see these additional choices, and her recommendations are in keeping with one key idea I’m espousing: that to reduce the sting of any single test (and the test’s control over educational practices), it makes sense to test more broadly.

At the same time, Wissner-Gross doesn’t see why testing should be extended to matters such as creativity or emotional intelligence. My rationale for extending our testing to include these capacities is that we can now do so for the first time with ability-based tests, and that there are important advantages to doing so. As I see it, these are to:

Despite our disagreement, I very much appreciated Wissner-Gross’ comments and recommend her letter.

Elaborating a Bit on the NY Times Op-Ed: Tests I Had in Mind

(Please note: I am still working on this section -JDM)

I’ve been asked about what additional tests I had in mind, specifically. A quick answer (and this is a work in progress), is below.

The tests, I believe, should meet certain key criteria:

Remember that I am acknowledging that all tests are imperfect—that includes all the tests I am recommending here. By using them together, however, I believe we can learn more about a person’s abilities than by using the SAT alone (or, worse, in my opinion, opting out).

Here is a short list of tests I had in mind when I wrote the Op-ed piece, but I’m sure there are more tests that meet these criteria.

I have a financial interest in the tests below on which I am a coauthor. For the other tests (on which I am not an author) I have no relationship with the authors or companies who publish them.

The Torrance Test of Creative Thinking

The measurement composite for spatial ability drawn from Project Talent and outlined by   on pp. 821 and 822 of:

Emotional Intelligence (Please note: I am a coauthor on the following test I am recommending).

Personal Intelligence (Please note: I am a coauthor of the following test I am recommending).

The Test of Personal Intelligence (TOPI). This test is presently in development and shows considerable promise.

The following are the articles that I supplied to the NY Times over the course of their fact-checking in support of my argument. One exception: I have provided a better article about spatial intelligence here than the one I supplied to the Times.

The surprise value of SAT scores:

The usefulness of the SAT itself and related tests such as the GRE:

Tests as Infrastructure and other uses of tests:

The usefulness of additional tests beyond the SAT: